A man was kicked and punched in the head during a fight in a town centre. Police were called to the brawl between four men in Thetford, White Hart Street, on March 24, where a man was reported to have been kicked and punched in the head. A man in his 40s has been arrested in connection with the incident and was taken to Bury St Edmunds Police Investigation Centre for questioning.

Five people arrested in Thetford after knife robberies at shops

Five people have been arrested in Thetford after staff in two shops were held up at knife point.

A council says it is “incredibly sad and disappointed” after fly tippers used the coronavirus crisis as an opportunity to dump waste.

A dance teacher from Norfolk is one of thousands of self-employed business owners who have been forced to close during the coronavirus crisis.

Insurance companies have vowed to support customers who are using their cars to volunteer during the pandemic.

The region’s RAF bases have been deployed to assist during the coronavirus crisis.

A town’s community centre has been forced to close due to coronavirus but bosses hope to repurpose the site to offer vital services.

Here to help: Meet the people who have stepped in during Thetford’s hour of need

Difficult times can often bring communities together and Thetford is one town which has shown just how much people care.

Call for volunteers to support “most vulnerable” in communities

Communities are being asked to give up their time and volunteer as a council works to support its “most vulnerable” and “in-need neighbours”.

As families celebrated Mother’s Day from a distance at the weekend, one Thetford grandmother said she was left “overwhelmed” as she came across a surprise left in her garden.

Here to Help: Where to get help in Thetford during the coronavirus outbreak

People in Thetford are rallying to provide help to the vulnerable in their communities.

A motorcycle group has called for more education, claiming a “minority of illegal riders” had given bikers in Thetford Forest a bad name.

£10,000 donated to foodbanks to support vulnerable during coronavirus outbreak

Two Norfolk foodbanks have been donated £10,000 from the local council to help it during the coronavirus crisis. The coronavirus has caused foodbank donations across the district to drop leaving them “struggling” to feed the most vulnerable in the community.

‘Let’s see how far it can go’: Why rainbows are being spotted in windows around Norfolk

Rainbows have been spotted in windows across Norfolk, as families have been doing what they can to occupy their kids and spread some much-needed cheer.

A music festival has been put back amid the coronavirus outbreak.

A town nursery has said its children are “flourishing” as they enjoy a new outdoor area at its new site.

‘Business as normal’ - Thetford shoppers not put off by coronavirus threat

It has been “business as usual” in Thetford’s town centre this weekend, despite growing concerns about the spread of the coronavirus.

‘HGV’s are pulverising our home’: Lorries continue to drive through town despite agreement

Councillors have accused a construction firm of breaking an agreement promising it will not drive lorries through their town, as a £160m project at RAF Lakenheath gets underway.

Temporary accommodation for ‘vulnerable’ families could be built in a town

Temporary accommodation for “vulnerable” families who have found themselves without a home could be built in a town.

Car owners in a town found their vehicles smashed after vandals targeted a street.

Medical experts have urged communities to “follow national guidance” and avoid doctors’ surgeries if they have coronavirus symptoms.

US airbase personnel have been self-isolating in an attempt to control a coronavirus outbreak after operations in northern Italy.

Norfolk’s smallest duo are looking for a home

A dog charity rehoming centre has called them its “smallest ever Duo”, and now it is looking for a family who can keep them together.

A town’s schools will soon offer more support to families with autistic children, as new learning facilities will mean they can be “part of whole school life”.

Town celebrates its heritage with sculpture carved from a tree trunk

A town is keeping its heritage alive as a team of chainsaw carvers have given new meaning to an old bit of tree trunk.

British singer Kate Dimbleby has been encouraging pensioners across Norfolk to “sing happy” as part of a scheme to tackle loneliness.

‘No hen is left behind’ - Can you help rehome chickens saved from slaughter?

They may not be everyone’s first choice when looking for a family pet, but volunteers from Norfolk have made an appeal to help find forever homes for chickens which have been saved from slaughter.

Glamping getaways have become a popular choice for holidaymakers, as sun cream and sandy beaches are swapped for bell tents and wellies.

A night-time flying warning has been issued as US air forces will take to the skies in Suffolk as part of a military exercise.

Five people arrested in Thetford after knife robberies at shops

Heartfelt messages and photos sent to grandparents during lockdown

Coronavirus: Will nature reap the reward? 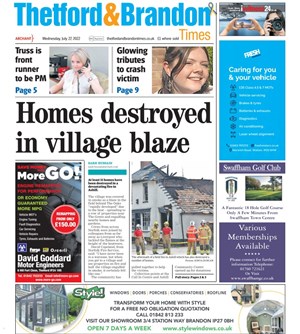